Rev. Doug Hughes and his wife, Cindy, retired from pastoral duty in August 2021.  They moved on to live their dream life in Florida.  We wish them the very best and look forward to hearing Doug's handicap drop! 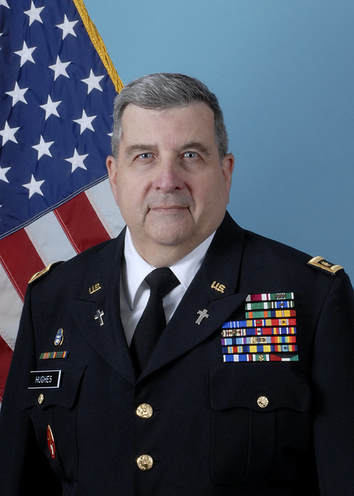 ​​Rev. Douglas Hughes was born July 21, 1957 at Wheelus Air Force Base, Tripoli, Libya.  He was raised in Alexandria, Virginia and graduated from T.C. Williams High School in 1975.  He attended Westminster Choir College in Princeton, N.J. and graduated in 1979 from Pfeiffer University with a degree in Church Music.  He attended Columbia Theological Seminary, Decatur, Georgia and graduated in 1983 with a Master of Divinity Degree.  Returning to the classroom, Chaplain Hughes earned a Master of Public Administration degree from Walden University in 2008 with a concentration in Homeland Security.

During his second year at Columbia Seminary, he became a Chaplain Candidate in the United States Naval Reserve.  Upon graduation, Rev. Hughes was ordained by the Presbytery of Florida in 1983, and his first pastorate was as the pastor of First Presbyterian Church, Gretna, Florida. ​In 1985, he was offered the opportunity to access and become an Active Duty Navy Chaplain and was assigned as the Chaplain for the 13 ships of Destroyer Squadron 12.  While deployed onboard USS Paul (FF 1080), he participated in ‘Attain Document III; Operations in the vicinity of Libya’.

Two years later he was assigned as the Chaplain for the 19 ships of Amphibious Squadron 10 and was on board the USS Barnstable County during operations off the coast of Panama.

Rev. Hughes was released from Active Duty in 1993 during the post Gulf War draw down.  After being released, Rev. Hughes kept his military career affiliation by joining the Army National Guard.

In March of 2011, Rev Hughes was once again mobilized and sent to Ft Dix, New Jersey as the Deputy Command Chaplain, where he spent almost four years in that position until de-mobilized in late 2014.  He retired from the US Army in June 2017, after having served for 35 years, and retiring as a Lieutenant Colonel.

In February 2015, he was called as and is currently the Senior Pastor at the Old Tennent Presbyterian Church in Tennent, NJ.